Apologies for little hiatus on blogging.  I had every intention to carry on regularly but then one of my friends suggested I start watching ‘Orange is the New Black’…and no-one has seen me since!  I’ve decided to have a breather between series’ and catch up on current affairs for a bit but OitNB is really good and I would thoroughly recommend it. 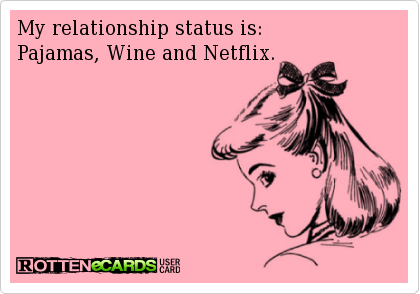 Boxsets have, so far, been my saving grace whilst whiling away the evenings wondering what the hell I do with all this quiet time once Charlotte’s (eventually) tucked up in bed and a vague sense of calm has been restored to the house (see previous post about housework!).

It started a couple of weeks into my seperation when my, also newly seperated, friend suggested I started watching Breaking Bad in my bedroom before I killed my parents with whom Charlotte and I stayed for a few weeks.  Two months later I came out of my room and wondered what I would do with my life now it had finished! I plodded on with reruns of Modern Family and a few Sex and the City episodes but didn’t want to start another all encompassing boxset quite yet.  Until now, obviously! It also means that I have another topic to add to my ‘conversation topics appropriate for first dates’ list which started off quite short, I must admit!

I stupidly mentioned I liked it on Facebook and someone suggested House of Cards so I don’t think I’ll be cancelling my Netflix subscription anytime soon!

Anyone else struggling with the resurgence of 90s

Do you remember these pics in my feed? Different d

The sunglasses have been on for the past couple of

The dog is looking at me, I don't know what to do,

It's been a day of birds today. This morning Otte

OK, so Warwick is a pretty lovely place 😍 #hom

Trying out our chimnea on a sunny but chilly eve.